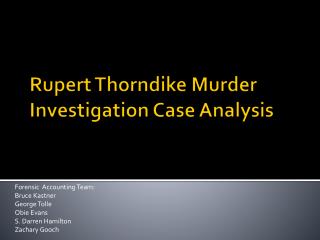 The Murder Case - By brooks burns. the murder case. the case. juan gonzalez was murdered on a street corner in los

Thorndike - . the law of effect. animal research before thorndike. romanes : was a student of darwin's very interested in

The First Murder Case - . 1/26/2013 wesley yay fellowship. ice-breaker: what is your attitude about life? what life motto

Google Evidence in Murder Case - . what: florida man appeals a first-degree murder conviction based on circumstantial

Rupert Brooke - . the dead. by kathleen plummer. structure and form and

RUPERT MURDOCH - One of the richest men in the world owns the “media” 20 th century fox television, fox