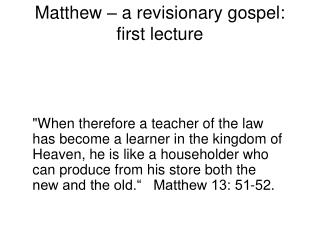 Matthew – a revisionary gospel: first lecture. "When therefore a teacher of the law has become a learner in the kingdom of Heaven, he is like a householder who can produce from his store both the new and the old.“ Matthew 13: 51-52. Matthew and Mark. Was Matthew dissatisfied with Mark? Sermon on the Mount: The Beatitudes and the Gospel of the Kingdom Matthew 5:1-12 - . sermon on the mount. galilean

MATTHEW 24:44 (NIV) - “so you also must be ready, because the son of man will come at an hour when you do not expect

Gospel Based Discipleship - . presented by: the episcopal church center developed and distributed by native ministries