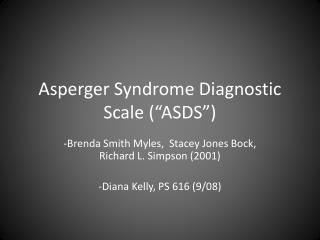 Gaza's first teacher with Down syndrome - Hiba al-sharfa, a 27-year-old teaching assistant with down syndrome, works at a

Diagnostic Tests - . shurouq qadose. diagnostic and laboratory tests: are tools that provide information about the

Abdominal Compartment Syndrome - . by sharra way - bingham, rn. ? what it is ?. a disease process that dramatically

Acute Coronary Syndrome - . objectives. the healthcare professional will have the ability to list the three classes of

2010 Beyond the Diagnosis: Autism Across the Lifespan Conference Richard L. Simpson - Children and youth with asperger's

Asperger’s Syndrome! - . by mariela borrego. asperger’s syndrome: what to