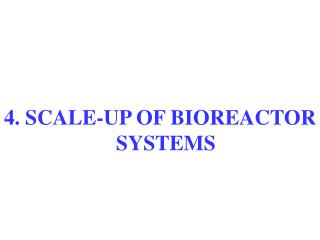 4. SCALE-UP OF BIOREACTOR SYSTEMS. DEFINITION OF SCALE-UP:  Study of problems associated with the transfer of experimental data from laboratory and pilot-plant equipment to large scale industrial equipment.

BIOREACTION AND BIOREACTOR - . by: mdm. noor amirah abdul halim. what is bioreactor?. a special reactor that sustains and

Industrial Biotechnology lesson 6 - . bioreactor design. introduction. the function of the fermenter or bioreactor is to