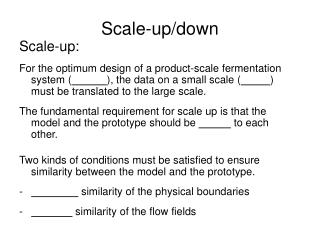 Scale-up/down. Scale-up: For the optimum design of a product-scale fermentation system ( ), the data on a small scale ( ) must be translated to the large scale. The fundamental requirement for scale up is that the model and the prototype should be to each other.