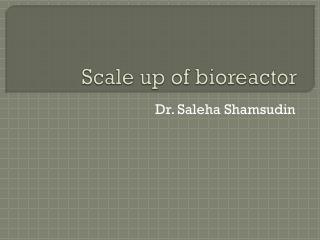 Bioreactor Scale-Up and CFD - What is scale-up?. to take a manufacturing process from the laboratory scale to a desired

BIOREACTION AND BIOREACTOR - . by: mdm. noor amirah abdul halim. what is bioreactor?. a special reactor that sustains and

The bioreactor - . part Ⅱ chapter 2. for each biotechnology process the most suitable containment system must be