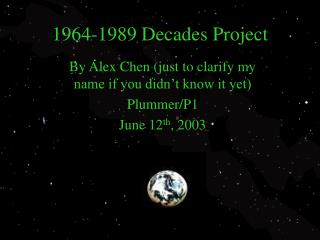 Decades Project - . three elements. 1) visual (pp) presentation you will present this to the class in oral form make you

Decades Project - . by michelle burke. the decade in review. the decade of contradictions. 2000-2009. i named the first

My Decades Project - . by; martha f errufino. my timeline . the major events in the 1930s. the most popular music genre

Decades PowerPoint Project - . 8 th grade. title slide. add the years of your decade list names in group and the period.

The 1964 Mississippi Freedom Summer Project - . outline. what was freedom summer? goals and objectives who