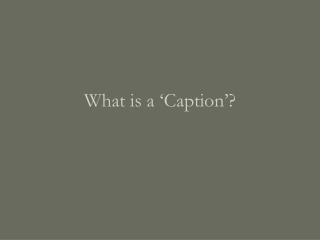 What is a ‘Caption’?. What is a Caption? . A caption is a title, short explanation, or description accompanying an illustration or a photograph. Step 1. This cartoon by a British artist appeared in Punch on 19 February 1919.   - The caption read: german criminal to

1.Which of the following is a reference note that is displayed at the end of the document? - . a. footer . b. endnote .

Canada and The First World War - . back to game board. the assassination of this austrian prince was one of the

Effective Practices for Description of Science Content within Digital Talking Books - . before the workshop begins,

WRITING CAPTIONS THAT WORK - . providing context to the photo. an effective caption. •answers the who, what, where,

Tables, Graphs &amp; Figures - . creating a table. tables should be arranged so that all the data for a given sample

How to write a Photo Caption - . by andi mulshine garden state scholastic press association for the spring adviser’s

Reconciling Nationalist Loyalties - . does everyone love a parade? why do people enjoy them?. read page 67 respond to the

Literacy in the Classroom - . rams in-service , october 12, 2009. please create a caption!. why is reading important in