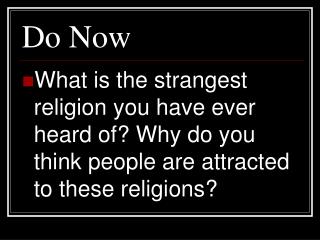 Do Now. What is the strangest religion you have ever heard of? Why do you think people are attracted to these religions?. Do Now. Meet with your groups and review what you need to do for today (today is the last day in the media center). Do Now. DO NOW - . pick up an of mice and men background notes sheet. prepare to take notes!!. introduction to…. of mice and