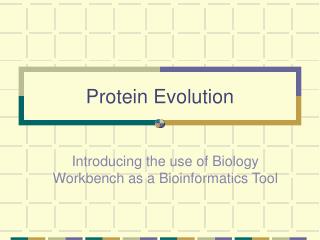 Protein Evolution. Introducing the use of Biology Workbench as a Bioinformatics Tool. What is Bioinformatics?. The application of computer technology to the management of biological information

Presented by Jennelle Heyer and Jonathan Ebbers December 7, 2004 - Protein modularity and evolution : an examination of

What is molecular evolution? - . theory of evolution as the basis of biological understanding. ”nothing in biology

DNA to Proteins to Evolution and Natural Selection - . biology 155 krilowicz spring 2010. the relationship between dna

Exploring Molecular Evolution using Protein Electrophoresis Is there something fishy about evolution? - . bio-rad