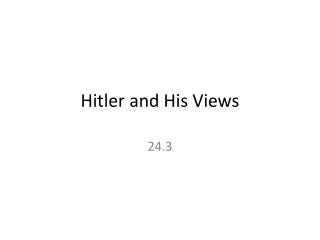 Hitler and his Opposition - . by sophie and mili  . the problem with

Hitler c onsolidates and expands his power - . gaining power legally. in 1925, hitler judged that the government was too

HITLER AND NAZISM - . hitler was born in 1889 in austria.in the first world war he enrolled for the army as a messenger.

Hitler - . connector. write down everything you associate with this man. outcomes. to know who adolf hitler was and his

Hitler and Propaganda - . nolan and liam. how did the nazis use culture and the mass media to control the people ?.

Hitler - . overview. hitler did a lot of bad stuff mein kampf is very interesting. hitler wrote a blueprint of what he

Hitler - . domestic policy. schools. teachers had to swear an oath of loyalty hitler and join the nazi teachers league.

Hitler - . the rise of evil. homework quiz. what kinds of domestic unrest affected great britain during and after the

Hitler - . the rise of a dictator part 1. look carefully at each of these pictures. come up with 5 adjectives to describe

Fascism: Mussolini and Hitler - . fascism. a political movement emphasized loyalty to the state and obedience to the