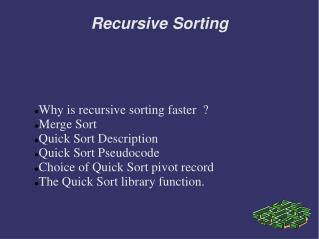 Recursion - . chapter 5. chapter objectives. to understand how to think recursively to learn how to trace a recursive

CS 302 Data Structures - . recursion: the mirrors. recursive solutions. what is recursion? there are two types of

What we may gain with the sorting at MEB - . presented by l. bottura for the meb session 4 - magnetic requirements for

Chapter 6 - . recursion. chapter objectives. learn about recursive definitions explore the base case and the general case