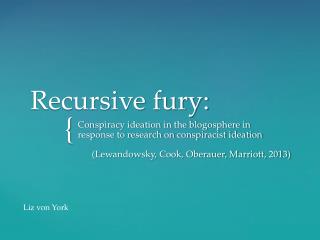 Nature’s Fury - . what are some things people can do to cope with nature’s fury?. what sorts of violent weather have

Fins of Fury - . a conceptual game design by kate duda. design challenge to create a fully functioning 3d game that is

RECURSIVE FUNCTIONS - . a recursive function is a function that calls itself. it will normally have two parts: 1. a