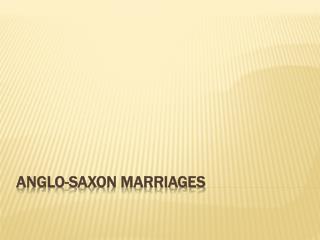 Anglo-Saxon - . language. the human mind is steeped in metaphor. as words emerged to name experience—and as they

Anglo-Saxon - . 449-1066. stonehenge. this relatively small island has been invaded and settled many times:. the earliest

Anglo-Saxon Background - . a prelude to beowulf. history. the anglo saxon period is the oldest known period of time that

Anglo-Saxon Notes - . the age of warriors english 12 – mrs. williams. major characteristics of the age:. copy these

Anglo-Saxon England - . the origins of beowulf. so who were the anglo-saxons?. germanic tribes from central europe the

Anglo-Saxon Helmet - . 9/2 bell ringer. old english was spoken by the anglo-saxons from approximately 450 to 1150.

Anglo Saxon Houses - . how do we know what anglo saxon houses were like?. the houses were made of wood and straw. and had

Anglo-Saxon Period - . 449-1066. the celts. a people who came to britain from the european countries irish, scottish,

Anglo-Saxon Life - . the warm hall, the cold world. 1939- suffolk, england archaeologists discovered a ship that was