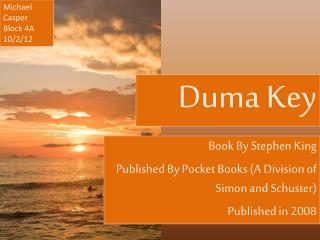 Michael Casper Block 4A 10/2/12. Duma Key. Book By Stephen King Published By Pocket Books (A Division of Simon and Schuster) Published in 2008. After a crane crushed his truck and left him with a missing right arm and a divorce, Edgar Freemantle was ready to die