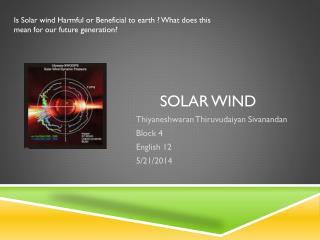 Is Solar wind Harmful or Beneficial to earth ? What does this mean for our future generation?. Solar Wind. Thiyaneshwaran Thiruvudaiyan Sivanandan Block 4 English 12 5/21/2014. Solar Wind. Solar wind is a phenomenon that occurs when charged particles are released from the solar corona solar wind - Off the grid. a community devoted to renewable energy. learn what it takes to go off the grid. visit our new

Solar Wind - . solar wind and how it affects earth. aurora borealis. nasa the mystery of the aurora. phases of the moon.

Solar Wind Quiz - . based on what you have learned so far, answer these multiple choice and true/false questions on the

The Solar Wind - . the solar wind is ionized gas emitted from the sun flowing radially outward through the solar system

The Solar Wind - . the solar wind is ionized gas emitted from the sun flowing radially outward through the solar system

Solar Wind Power - . presented by, sudhin p.k roll no:58. “ if at first an idea does not sound absurd, then there is no

Solar and Wind Power - . by josh lafayette. pros of solar. more efficient than most alt sources and during time can be

Solar Energy and Wind - . chapter 13. earth’s energy budget. heat refers to thermal energy that is transferred from one

Solar &amp; Wind Energy - . energy from the sun solar energy is harvested in two methods 1 st :one is called

Solar and Wind Power - . mariah negrillo-soor. why use solar energy??. potential to supply energy for full year but