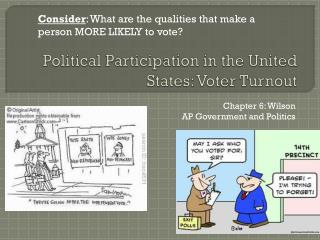 Consider : What are the qualities that make a person MORE LIKELY to vote?. Political Participation in the United States: Voter Turnout. Chapter 6: Wilson AP Government and Politics. Voting and Federalism. The Constitution: Fed not responsible for elections… Abortion in the United States - . us public opinions about abortion. incidence of pregnancy and abortion. pregnancies in

Together We Will: Evidence from a Field Experiment on Female Voter Turnout in Pakistan - Xavier gine &amp; ghazala

Intersections The Political Economy of Race and Class in the United States - . i. defining race and class. a. little

The United States and World War I - . chapter 19. toward war. era of intervention. a) roosevelt corollary: u.s. as an