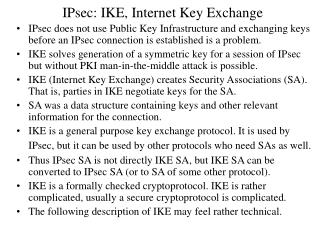 IPsec: IKE, Internet Key Exchange. IPsec does not use Public Key Infrastructure and exchanging keys before an IPsec connection is established is a problem. IKE solves generation of a symmetric key for a session of IPsec but without PKI man-in-the-middle attack is possible. Chapter 7 E-Commerce: The Internet, Intranets, and Extranets - Learning objectives when you finish this chapter, you