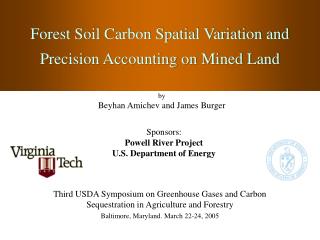 Carbon sequestration: Forest and soil - . ’objective of the presentation is to give a general picture on possibilities

Carbon and the Forest - . what is carbon?. what has carbon?. you!. carbon cycle. elevated atmospheric co 2 and climate.

Conserving Land and Soil - . conserving land and soil. less than a 1/4 of earth's surface is dry land. except for the

Conserving Land and Soil - . types of land use. agriculture new farmland must be created by clearing forests, draining