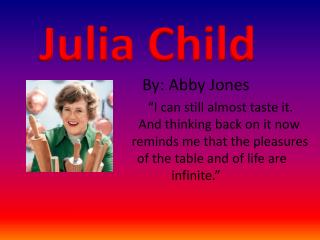 Julia Child. By: Abby Jones “I can still almost taste it. And thinking back on it now reminds me that the pleasures of the table and of life are infinite.”. Introduction. Born: August 15, 1912 in Pasadena, California Grammar Golf - . by abby davis. begin a round of golf (click here). who’s

Chapter 4 - . the classroom learning environment. to remain an effective teacher with a minimum of distractions in the