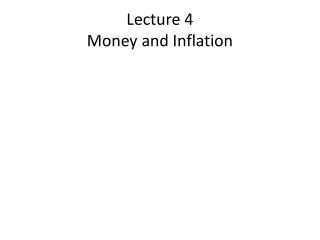 Lecture 4 Money and Inflation. Money. What is money? Money is any object that is generally accepted as payment for goods and services and repayment of debts. The main functions of money are Medium of Exchange Store of value Unit of account.

12. INMATE MONEY ACCOUNT - Unit goal 12.1: the student will be able to summarize the process of maintaining inmate money

Role of RBI in Controlling Inflation - . dr. deepakshi gupta. what is price instability. fluctuations in prices.

FINANCE - . that is my job. finance main ingredients. money in money out. money in = revenue = source of funds. money in