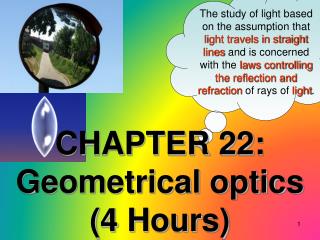 The study of light based on the assumption that light travels in straight lines and is concerned with the laws controlling the reflection and refraction of rays of light. CHAPTER 22: Geometrical optics (4 Hours). UNIT 22 : GEOMETRICAL OPTICS. 22.1 Reflection at a spherical surface Chapter 22. Wave Optics - . light is an electromagnetic wave. the interference of light waves produces the colors

Geometrical Optics - . huygens principle . light can be treated as a series of rays with point sources thus, light can be

Chapter 22 Section 4 - . tumultuous: characterized by unrest or disorder the tet offensive turns the war early in 1968,

Chapter 5 Geometrical optics January 14,16 Lenses 5.1 Introductory remarks - Image: if a cone of rays emitted from a

CHAPTER 22: Geometrical optics (4 Hours) - The study of light based on the assumption that light travels in straight

3. Geometrical Optics - . geometric optics —process of light ray through lenses and mirrors to determine the location

Chapter Five Geometrical Constructions - . purpose. this chapter provides an overview of how to: competently use a range