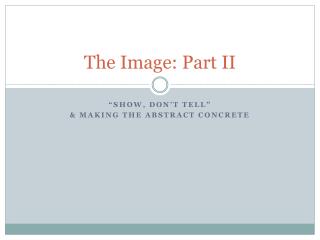 The Image: Part II. “Show, Don’t tell” & Making the abstract concrete. Concrete, Significant Details. Concrete: Means that the there is an image, something that can be seen, heard, smelled tasted or touched. Detail: Means that there is a degree of focus and specificity.

Body Image - . what does body image mean?. is a picture how people view their body and how they think others see them and

Self Image - . self image. please identify 4 adjectives that describe you: at home at school with friends in general.