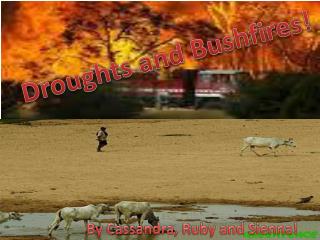 Droughts and Bushfires!. By Cassandra, Ruby and Sienna!. Droughts.

Bushfires - . what is a bushfire?. a bushfire is a fire in the bush . it can be in scrub ,woodland or grassland. bushfire

Floods and Droughts - . floods. floods effect a lot of people. floods are horrible for everyone. they kill and destroy

Climate Change - . climate change is a global issue that affects us all. changes in climate patterns mean that extreme

Droughts - . what is a drought?. a drought is an unusually long time where there is not enough water to meet the needs of

Droughts and Bushfires! - . by cassandra, ruby and sienna!.

DROUGHT - . what are droughts and what are their effects on the african people? . what is a drought? . a drought occurs

Droughts - . by addison hyde jack farbarik reid joseph addison tilley makiyah porter. what is a drought?. a drought is a