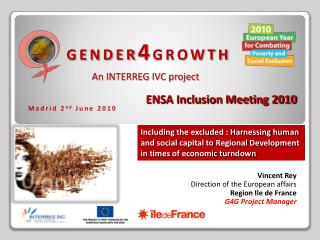 Unit 4 GENDER &amp; SEXUALITY - . gender development. much ado about a small difference  : though we can identify

Gender and Sexuality Chapter 4 - . gender and sexuality. gender development how are we alike? how do we differ? the

SESSION 4 GENDER ISSUES IN TRADE - . session goals. to introduce participants to: the relationship between trade and

Chapter 4: Gender In Today’s Society - . the biological foundation of gender. sex – refers to biological traits that

Chapter 4 Gizmos, People, and GEnder - . it’s a fact. most people prefer to work with either technology or people. now

Chapter 4 Gizmos, People, and GEnder - . it’s a fact. most people prefer to work with either technology or people. now

Student Growth Workshop #4 - . tying it all together. review. who? how much growth? what assessments? when?

Gender and Gender Stratification - . what is gender?. gender: the personal traits and social positions that members of a

Gender - . women in rural agriculture. by daniela, giuliana &amp; wenjie. in south asia, women provide up to 90% of

Gender - . nouns. some considerations:. 1. most nouns that end in o are masculine. el libro 2. nouns that indicate male