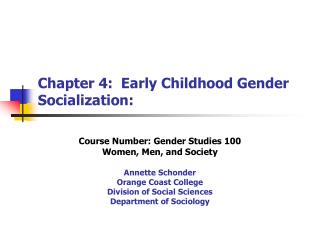 Chapter 10 - Chapter outline. the global context: the status of women and mensociological theories of gender

Gender Socialization - . jess macdonald . the historical context of the study of gender . feminism: the belief that

Chapter 3 - . socialization. questions for you…. which agents of socialization have had the greatest impact on your