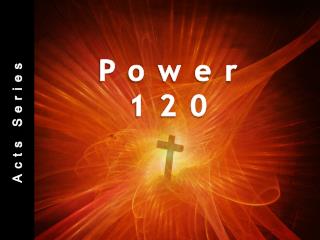 Power 120. Acts Series. This evening, we are going to discuss the split which took place between Paul and Barnabas. Most people have taken the approach that this was a negative event. I look at it differently. That is why I titled this teaching: The Parting—What Really Happened.

Infinite Sequences and Series - In this chapter we shall study the theory of infinite sequences and series, and

New Scope of Practice, Authorized Acts and Standards of Practice for MRTs in Ontario - . september 2011 workshops

The Acts of the Apostles Chapter 1 - . acts – a study of revelation. “in the beginning god …” totally miraculous

The Acts of the Apostles Chapter 1 - . acts – a study of revelation. “in the beginning god …” totally miraculous

TRANSFORMATION OF YOUR MINISTRY - . download this powerpoint at http://www.jlwilliams.org/media/powerpoints/. biblical