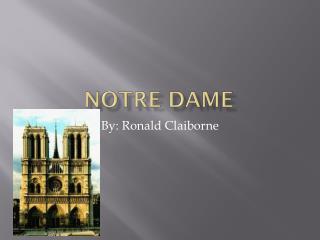 Notre Dame - By: will hulcher. notre dame. date built, how old?. the workers started the construction on notre dame in

Notre Dame Paris - . organization of the landscape. most visible element of the religious landscape? places associated

Notre Dame Service Project - . expectations and criteria. “whenever you did this for the least of my brothers and

Notre-Dame Cathedral of Reims - . by: chiara mancuso. history~ a gothic cathedral. the notre-dame cathedral of reims is

Notre Dame de Paris - . description. notre dame de paris is a gothlic , roman cathedral. . when was it built? why? by

Notre Dame de Paris Cathédrale - . by leah m hoffman. nov. 12.13. “the cathedral church must be seen as the centre of