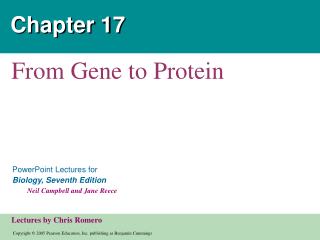 Chapter 17. From Gene to Protein. Overview: The Flow of Genetic Information The information content of DNA Is in the form of specific sequences of nucleotides along the DNA strands. The DNA inherited by an organism Leads to specific traits by dictating the synthesis of proteins