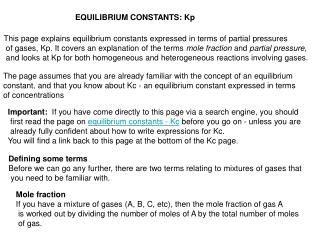 EQUILIBRIUM CONSTANTS: Kp. This page explains equilibrium constants expressed in terms of partial pressures of gases, Kp. It covers an explanation of the terms mole fraction and partial pressure , and looks at Kp for both homogeneous and heterogeneous reactions involving gases. Which of the experiments has resulted in an equilibrium state? What is the value of the equilibrium constant for the

Chemical Equilibrium - . equilibrium. initially all liquid gas only, produced balance of gas and

Enumerations, Autoboxing - . enumerations enumeration is a list of named constants. in languages such as c++,

Final Review - . when a system at equilibrium is disturbed by application of a stress, it attains a new equilibrium

Chapter 12: Static Equilibrium - . first condition for equilibrium. when a particle is in equilibrium (no acceleration),

Applications of Aqueous Equilibria - . “common ions”. when we dissolve acetic acid in water, the following