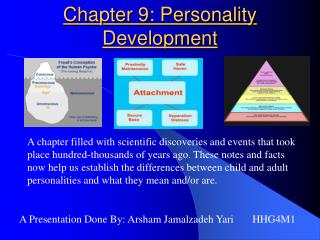 Chapter 9: Personality Development. A chapter filled with scientific discoveries and events that took place hundred-thousands of years ago. These notes and facts now help us establish the differences between child and adult personalities and what they mean and/or are.

Chapter 10: Social Behavior and Personality in Preschool Children - . 10.1 self 10.2 relationships with parents 10.3

Personality Discussion - . how would you describe your own personality? is your personality the same as it was 5 years

Your Personality - . why are you they way you are?. psychologist’s theories on personality

Personality Development - . i. approaches to studying personality. psychoanalytic – (freud) focuses on the child

Chapter 9 - . biological foundations of personality. questions to be addressed in this chapter. are infants born with