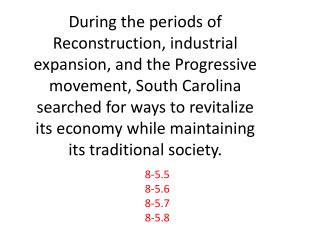 During the periods of Reconstruction, industrial expansion, and the Progressive movement, South Carolina searched for ways to revitalize its economy while maintaining its traditional society. 8-5.5 8-5.6 8-5.7 8-5.8.