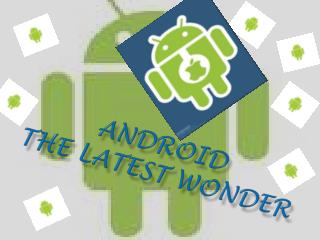 ANDROID The Latest Wonder . What is Android. Android is a software platform and operating system for mobile devices, based on the Linux kernel, developed by Google . Oh The Wonder - . when i survey the wondrous cross on which the prince of glory died,. my richest gain i count but loss

latest buzz on android development - Android application has been created and is run by google. whereas it's google that

The Wierdest wonder - . is it good or is it bad?. amanda experience. bad calibration of the detector very heavy

Download Aptoide Android Latest Version - 2019 for android device. in these pdf you can find how to download? how to