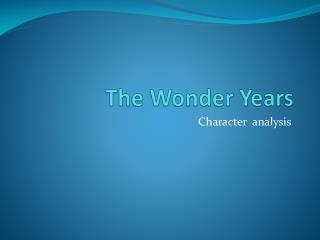 THE WONDER YEARS INC. - The wonder years inc. open house. philosophy. our program aims to provide a premium service to

Puberty: The Wonder Years - . wendy l sellers rn. to make it easier for discussions in the classroom, it is important to

Oh The Wonder - . when i survey the wondrous cross on which the prince of glory died,. my richest gain i count but loss

The Wierdest wonder - . is it good or is it bad?. amanda experience. bad calibration of the detector very heavy

Wonder - . by r.j. palacio. pre-reading activity 1. if you had to choose one adjective to describe yourself, what would