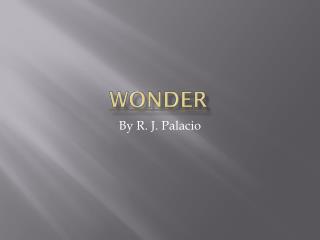 Wonder. By R. J. Palacio. Book Trailer. http://www.schooltube.com/video/cf0b63f7860f4477a542/. Natalie Merchant’s “Wonder”. Ever hear stories about a genie in a magic lamp? This is what a magic lamp might look like. Wonder - . by r.j. palacio. pre-reading activity 1. if you had to choose one adjective to describe yourself, what would

Wonder - . by aoife lewis &amp; megan richards. onderful things happen in our world we just need to admire them. ne

Ever wonder… - . what job is best for you?. john l. holland. created the career theory that argued &quot;the choice

I wonder… _ = ? - How do you solve a division problem involving fractions when the quotient has something left over (a

I Wonder… - . tips and tricks for internet searching. watch your spelling when you are searching for your answer use