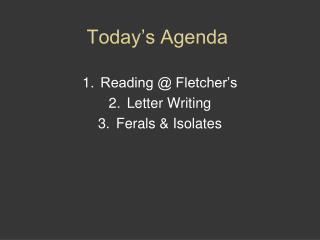 Today’s Agenda. Reading @ Fletcher’s Letter Writing Ferals & Isolates. Letter Writing Assignment. Find something from your life that you feel that could be accused of negatively nurturing a child or adolescent in one or more of the following areas: Body Image Lifestyle Gender Roles