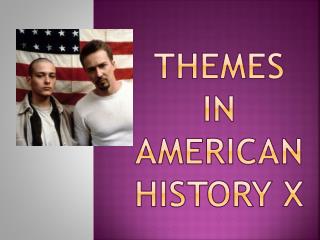 Themes in American History X . Racism. Definition The belief that all members of each race possess characteristics or abilities specific to that race, esp. so as to distinguish it as inferior or superior to another race or races. Themes in us history - . seven themes. identity nationalism/ groups. national identity what is the american culture? what

World History Themes - . cooperation/conflict. people working together or struggling against one another.

Nature: American Literature and American Themes - . let’s discuss: how does into the wild represent our unit theme:

Warfare in American History - . this is why we fight…. know your nation’s

Women in American History - . pioneers and reformers. some of the ladies. annie oakley: was known as the “best shot

American History - . how do we start this country?. tell me;. have you always succeeded in every thing you have ever