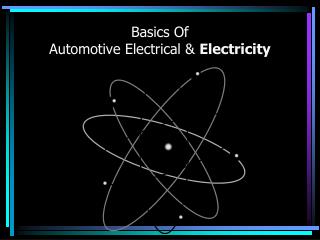 Basics Of Automotive Electrical & Electricity. Matter. Anything that has mass & takes up space:. Matter. Can exist in three states Solids Liquids Gases. Molecule. Smallest portion of matter that still retains all of the properties of the original Molecules are made up of atoms. Automotive Electrical - . terms to know. capacitance - the property of a capacitor or condenser that permits it to

Basics of Electricity - . what is electricity? . involves the movement of electrons is invisible provides light, heat,

Chapter 13 Basics of Electricity - . “competition is a by-product of productive work, not its goal. a creative man is