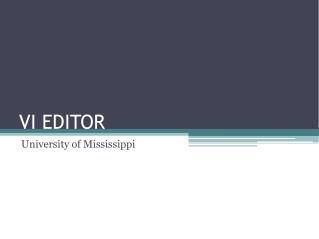 VI EDITOR . University of Mississippi. Vi Editor. What is Vi ? Vi is a screen based editor. The screen of your terminal will act as a window into the file you are editing. Most commands to Vi move the cursor around the file . Faster (than pico ) for those who can type Visual ( vi ) Editor - 7. chapter. visual ( vi ) editor. objectives upon completion of this module, you should be able

Chapter8 The vi Editor - . introduction to vi. modes of operation the work buffer during the editing session, vi make all

Editor: - . dr mohammad sadrkabir. is there an association between coeliac disease and flammatory bowel diseases? a study