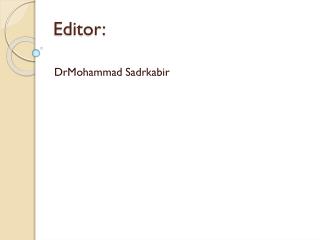 5 Ways to Make a Good First Impression on the Editor - Are you looking for a copy editor’s job? check out our tips on

VI EDITOR - . university of mississippi. vi editor. what is vi ? vi is a screen based editor. the screen of your

Introduction to the gedit editor - . gedit: the gnome editor . gnome: . gnome is a freely available (i.e., no cost)

Letters to the Editor - . authentic practice. how it works:. -spend time reading over ajc.com, reviewing the top stories

CadSoft EAGLE - . award-winning pcb design software that it’s at the head of its class welcome to the eagle webinar

RSOC - . fred baker chair. what is the rsoc supposed to do?. rsoc is tasked with hiring and overseeing the activities and