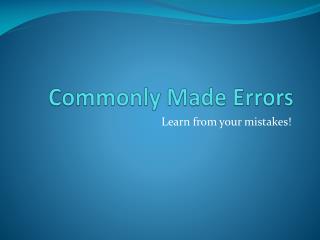 Commonly made errors - . beware!. like and as do not always mean you have a simile. no sunshine like the sky not a

Commonly Seen Errors In Department Audits - . and how to fix them. rights &amp; obligations. wac 296-15-400 within

Checklists &amp; Commonly Made Mistakes - . checklist. number all pages; be consistent in formatting! use

Commonly Used Products Made Out of Rubber - Rubber products are commonly found at homes and offices. however, they are

5 Commonly Made Interior Design Mistakes and How to Avoid Them? - The perfect way to stay away from such circumstance is

Commonly Confused Words - . in your notebooks or the grammar section of your binders, you will write the definitions of

Commonly Confused Words - . your/you’re. your = possessive form of you you’re = contraction of you are. commonly