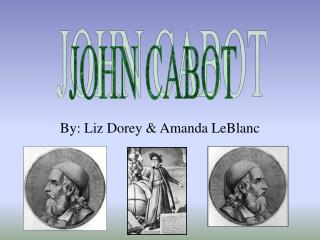 JOHN CABOT. By: Liz Dorey & Amanda LeBlanc. JOHN CABOT HISTORICAL BACKGROUND. John Cabot was an Italian born English explorer. He was born around 1455, in Gaeta, Italy In Italy he was known as Giovanni Caboto. GIOVANNI. By 1461, Cabot was living in Venice, where he became a citizen. LD in 2003: Revitalizing, Reauthorizing, and Reconceptualizing our Definitions, Assessment, and Interventions of