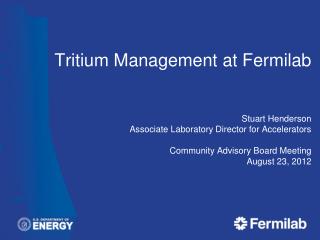 Tritium Management at Fermilab Stuart Henderson Associate Laboratory Director for Accelerators Community Advisory Board Meeting August 23, 2012. Outline. What is Tritium? How and where is it produced? How are we managing tritium? In what forms does tritium leave the site?