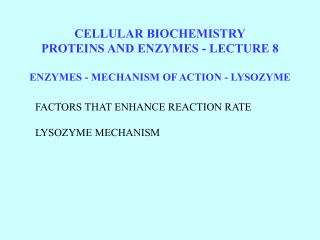 Proteins and Enzymes - What do proteins do for me?. protect me (immunity)move me aroundpermit communication between

ENZYMES made of Proteins - . 100s to 1000s of chemical rxn in human body enzymes speed up rxn by millions and even

Enzymes are Important Proteins - . cornell trick it out!. learning goals…. describe the function of enzymes a.k.a