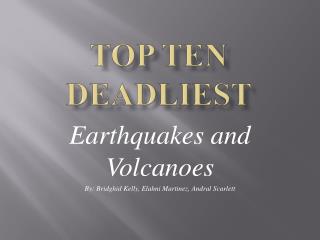 The top deadliest volcanoes and earthquakes - . what is a volcano?. a volcano is an opening, or rupture, in a planet's

Deadliest viruses - . ebola. its melodic moniker may roll off the tongue, but if you contract the virus  that's not the

Deadliest Insects - These creatures a small in sizes but can be deadly in many ways.