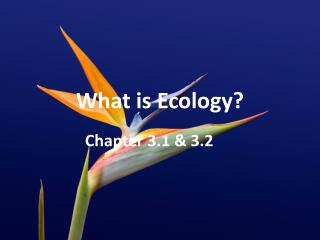 What is Ecology?. Chapter 3.1 & 3.2. Ecology . Study of INTERACTIONS among: Organisms Organisms and their surroundings. Biosphere. Largest “ecology” Contains all life on Earth. A web of connections. Levels of Organization. Ecology - . in your mind, picture organisms that you think may live in a forest. then, write about one of the organisms.

Scales and Scaling in Biology and Ecology - . mathematical models of dynamics and control of environmental change,