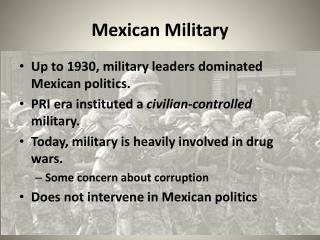 Mexican Military. Up to 1930, military leaders dominated Mexican politics. PRI era instituted a civilian-controlled military. Today, military is heavily involved in drug wars. Some concern about corruption Does not intervene in Mexican politics. Mexico: What Type of Regime?. Mexican Constitution - . 1824. title 2, article 4 the mexican nation adopts for the form of its government a popular

Mexican Army - . santa anna had taken his brother in law cos ’ defeat in san antonio

Mexican California - . this is the first of three sets of slides dealing with mexican california and the gold rush.