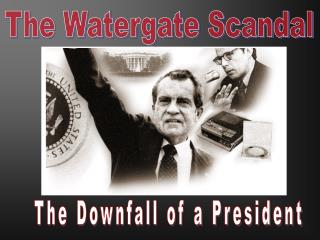 The Watergate Scandal. The Downfall of a President. The Watergate Complex. The President’s Men. When Nixon took office, the executive branch was the most powerful branch in the government – it had taken on an air of imperial or supreme authority. Chapter 31 – A Search for Order - . section notes. video. a search for order. the nixon years from watergate to ford

Final Exam Review- US AP 2009 (if you know everything on this, you’ll do fine) - . credit mobilier. scandal created by

The outside world in 1973 - . cold war active watergate scandal would lead to nixon resignation trans-atlantic