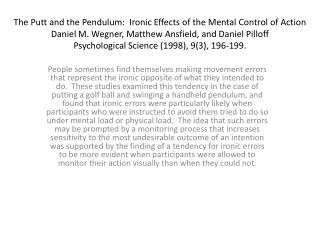 The Putt and the Pendulum: Ironic Effects of the Mental Control of Action Daniel M. Wegner, Matthew Ansfield , and Daniel Pilloff Psychological Science (1998), 9(3), 196-199.