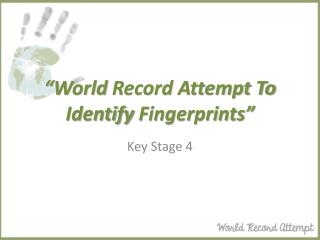 Suicide - . chapter 10. suicide. suicide is a leading cause of death in the world there are about 700,000 people who die

FINGERPRINTS - . history. the first systematic attempt at personal identification was devised by a french police expert,

The Electronic Medical Record at Carilion Clinic - . tools for building the clinic. plan leadership board governance

World War I Notes - . causes of world war i: main. militarism refers to the tendency to identify national success with